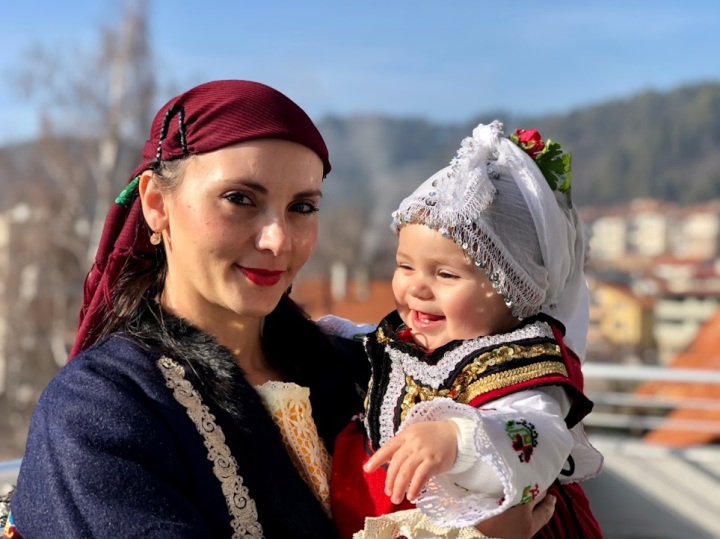 My home town, Razlog, is famous for preserving its traditions.

Each year there are plenty of opportunities for its inhabitants (and any enthusiasts) to dress up in traditional Bulgarian clothing and to gather in the center of the town to celebrate together by holding hands and forming a long and colorful folk chain dance (horo).

There is hardly any house that does not possess traditional Bulgarian clothing (nosiya) and hardly any family member who doesn’t feel like participating in at least one of these occasions.

January in particular is a very special month in Razlog.

The year starts with The “Starchevata” mummer (kuker) festival. On January 1st, hundreds of people from Razlog and the surrounding area dress up in traditional Bulgarian clothing and costumes and parade through the city center.

The mummers (kukeri) play a central part in the town festivities and are the main attraction. They are elaborately costumed men who perform traditional rituals intended to scare away evil spirits.

Their costumes are manufactured of goat skin and some can cost several thousand euros. Their cone heads are up to 2 meters high and end with horse tails. The most important element of the costumes is the bells, which can weigh up to 40-50 kg.

The whole festival can also be described as a competition among the neighborhoods. The neighbourhood that throws on the best show with the best costumes is proclaimed the winner and gets to carry that honor for the rest of the year.

I am proud to share that I participated in this festival in 2014. It was an amazing experience that I will definitely remember for the rest of my life.

This tradition dates back to 1951 and each year on January 21st the women who are involved in the childbirth process are being honored. Back in the days these used to be the grandmothers and older women. That’s where the name of this tradition comes from.

On this day the newborns from the past twelve months and their mothers and grandmothers get dressed in traditional Bulgrian clothing and do a traditional dance in the town’s square.

This one is my favorite tradition as it puts  attention on new life. It’s great to see how each year the town gets younger by a certain amount of newborns.

This year this tradition was even more special to me as I participated together with my mother and little daughter. I hope that one day my daughter will invite me to join her and her child and by doing so will inspire her child to keep the tradition alive.

Why is it important to preserve traditions?

I have spent quite some time trying to figure out what makes people join these celebrations year after year.

And for me personally, what makes me book our holiday already in August and go through the trouble of bringing my husband and little girl from 2400 km just to be part of all this?

To be honest the answer to these questions is still a mystery to me. I believe this is not something that can be described with words.

The closest answer I can find is more like looking for a feeling of belonging. A feeling of being part of something that is bigger than me. Part of a culture and a nation that have existed before me and will continue to exist way beyond me.

I have been living abroad for almost 14 years. Everyday I speak three languages. I work with people from various backgrounds and I travel to close and distant countries. By being exposed to so many different cultures I embrace all kinds of new perspectives and lifestyles.

Once in awhile I feel the need to come back to my roots. To feel surrounded by people who share similar background and history and to remind myself where I am coming from.

It’s namely the traditions who unite nations by passing values and rituals from one generation onto the next one. By participating in occasions such as the ones described above we get closer to each other, closer to our roots, our ancestors, and ideally closer to our inner selves.

Each of us comes from a different cultural background. Going back to my roots would mean something different to me than what it would mean to you.

Which traditions have you grown up with?

Which of those do you value the most?

Which traditions would you like to pass onto future generations? Why?

What do they mean to you?

Feel free to share your most favorite traditions with us. By doing so let’s spread the word of where we are coming from and how our cultures have evolved over the centuries.

2 thoughts on “Why is it important to preserve traditions?”