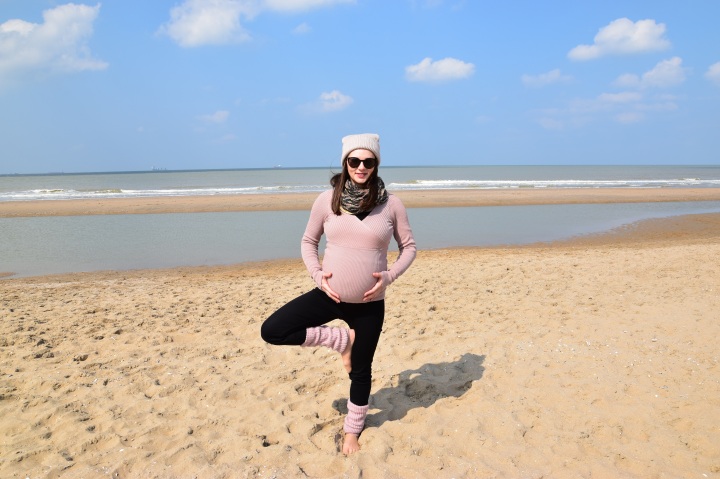 Yes, we are almost there!

To be honest I didn’t expect to feel much difference right away but the moment I entered the third trimester, I immediately felt that something had changed — suddenly I was playing in the highest league of pregnancy.

Compared to the feeling of being invincible during the second trimester, the belly was growing bigger every single day and my energy was going down with it.

Work was sucking up all my physical and mental energy and the only way to survive the work week was to take a nap every evening after dinner and then go to bed again around midnight. That didn’t leave me with much time at home after work.

The weekends were not much different — I had a maximum of one social activity per day, surrounded by naps before and afterwards. To be honest, I totally didn’t mind this new routine 😉

During the ninth month when I was not working I would often wake up, have breakfast and go to bed for another two hours of uninterrupted sleep.

I hope I am well prepared for the years of sleep deprivation that lie ahead!

As you can image, I was quite tired at this time of the day and the only thing I was hoping for was to fall asleep as quickly as I could. However, complaints such as itching all over the body but mostly the belly, restless legs and the heavy belly often stood in the way. It was getting more and more painful to turn around and I was basically not able to find a comfortable position on the couch or in bed.

Luckily the whole drama was over in a few hours resulting in me getting utterly exhausted and finally falling asleep. At least I cannot complain about my night sleep. With some minor exceptions I was sleeping all night long besides the numerous visits to the restroom, of course.

Until now I was reading everywhere about the myth of eating for two and that you don’t need to increase your calories intake by much during pregnancy. Well, wait until the last month of the third trimester.

I was eating regularly during the whole pregnancy but it got to a point that I had just had a meal and was still starving afterwards. Seriously it was not me being greedy for more food simply out of boredom, it really felt like a matter of life or death.

It was usually not the amount of food that was important but mostly the quality. I haven’t cooked so often and so many various types of meals in my whole life! The third trimester was a culinary heaven, sometimes resulting in me serving four course dinners at home.

The urge for nesting

On Friday, two weeks before the beginning of my maternity leave, instead of the normal urge to go out and celebrate the end of another work week, I suddenly felt the need to start packing my bag for the hospital. I realized that there was not much time left for preparations and what if the baby would surprise us earlier than expected?

So there I was on a Friday evening, washing and ironing baby clothes, making lists of items we need to take with us to the hospital.

Besides all of the above, I would still rate the third trimester as the most rewarding one.

But the third trimester was the real deal — the baby and I have already built such a strong bond that it is fun to share my days with her whatever I am doing — going out for a walk, watching a movie, taking a nap.

I am observing her daily routine of waking up and sleeping and I am making jokes when she is not awake at her usual time. I haven’t felt lonely even for a second because no matter what I am doing or where I am going, I always have my “partner in crime” with/in me.

I remember asking myself the following question somewhere during the pregnancy:

“When will the time come for me to be the only one inhabiting my body?”

During the last month of pregnancy I actually realized that I would miss the movements in my belly once the baby is born. It’s amazing how quickly we get used to change, isn’t it?

It’s been nine months of getting used to the thought of becoming a mother and anticipating of how my life will change for good.

At first I thought that the nine months of pregnancy would be way too long and now I realize that it was just enough and actually every single month had its ups and downs for a reason.

I believe it’s important to go through life being aware and alert about the experiences we are going through.

Pregnant or not, I hope you can also look back at the past nine months of your own life and appreciate everything that has happened to you and learn from it.

After all, life is a school and each of our days is full with valuable lessons.

It’s up to us to open our eyes and ears and learn as these lessons are meant to make us a better person tomorrow.

3 thoughts on “The third trimester of pregnancy”